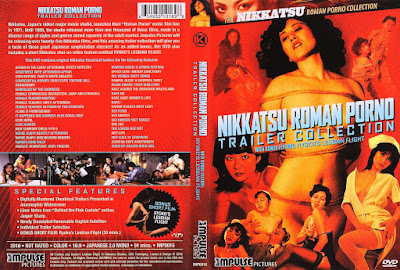 This collection is a compilation of 38 trailers and offers a pleasing taste of, hopefully, a lengthy release schedule that will see many of these films distributed for the very first time -- legitimately -- with English subtitles. It's encouraging, too, that the condition of these trailers is excellent considering their vintage.

To be fair, some Nikkatsu titles such as Assault! Jack The Ripper (Mondo Macabro) and Star of David: Hunting for Beautiful Girls (Discotekmedia) have been released in the U.S. in excellent subtitled editions, but these releases were not indicative of broader releasing plans (of this type of material) for their distributors. 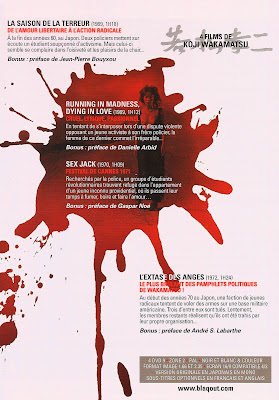 I've written extensively on Nikkatsu's output in these blogs, so I'm not going to bore you with more introductory history.

The trailers featured in this collection are quite diverse in quality and tone. Nurses Gone Wild is light-hearted softcore, while Yasaharu Hasebe's Rape! is a dark masterpiece. 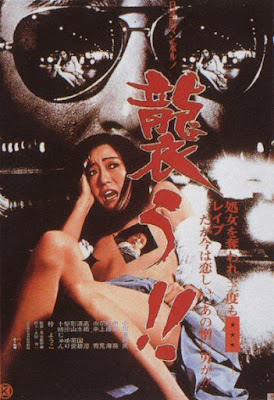 Of the trailers included in this compilation, I've seen about half of the movies themselves. My favorites of the ones on offer are Rape!, Zoom In: Rape Apartments, Sex Hunter (an extraordinary piece from 'Evil Dead Trap' director Toshiharu Ikeda), Race Across the Drenched Wasteland, Sex Hunter: Wet Target (from Yukihiro Sawada, the director of Flesh Target - Rape), Female Teacher: In Front of the Students, Female Teacher: Dirty Afternoon, Female Teacher Hunting, and The Lovers Are Wet.

It's worth mentioning that these trailers may not be entirely representative of all the features Impulse will be releasing; they may not even release some of these in feature form at all. Recently, on the AV Maniacs forums, Don May Jr., the head honcho of Impulse/Synapse, mentioned additional titles such as Eros School, True Story of a Woman in Jail: Sex Hell, and Woman in Heat Behind Bars. 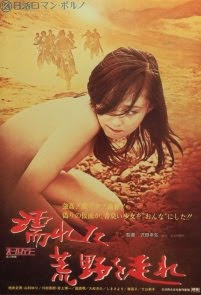 Race Across the Drenched Wasteland (aka 'Retreat Through the Wet Wasteland')
In anyone's book, these upcoming releases are essential purchases -- not downloads! Clearly, Impulse has made a substantial financial commitment to these titles, and there will be no future commitments if sales are not healthy.

In the long run, we will all lose ouit if the legit DVD's are not supported with dollars. I can not stress this hard enough. Is there a market for such a flood of moist magic? I hope so. I know I'll be snapping up every title. I hope other fans do, too.

The first two out of the gate are Female Teacher: Dirty Afternoon (a favorite of mine) and Debauchery, a film I have never seen. The trailer on the compile looks terribly tasty, though.

There are dozens of Nikkatsu and non-Nikkatsu titles beyond the Impulse titles that have yet to see English-subtitled releases including Raping! and Rape 13th Hour (two dazzlers from Yasaharu Hasebe) and Koyu Ohara's White Rose Campus - Then, Everybody Gets Raped, a spectacular piece of Cormanesque exploitation. 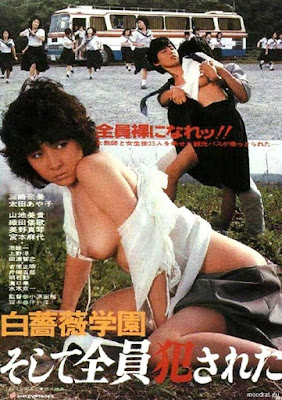 The unreleased White Rose Campus: Then, Everybody Gets Raped!
Available in Japan only
Also of note are Ohara's Zoom Up: Rape Site, Beautiful Teacher in Torture Hell, Captured for Sex 2, and Serial Rape (from Yojiro Takita, the director of the Oscar winning Departures).

Additionally, Pink Pineapple's amazing Rapeman series has only been released on DVD in Japan; it's not subtitled. An English-subbed release of that would be like Xmas. 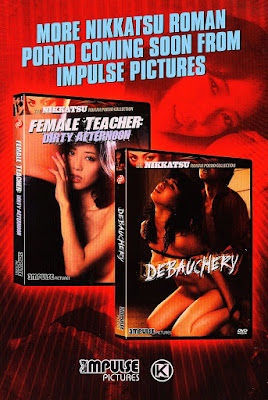 However, if so-called "fans" opt to download the Impulse titles for free, we can all kiss the prospect of seeing legitimate releases of these films goodbye.

Support the genre with dollars.

There's no other way to assure its survival. 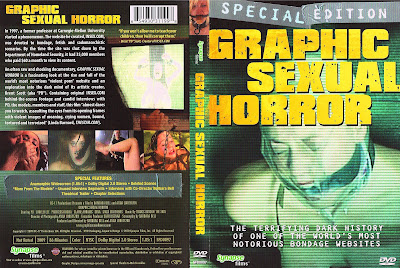 A recent release from Synapse that I can't recommend highly enough is Graphic Sexual Horror, a truly amazing documentary about the life and death of insex.com, a website that was closed down by American ('Land of the Free') authorities.
Posted by Phantom of Pulp at 10:33 AM