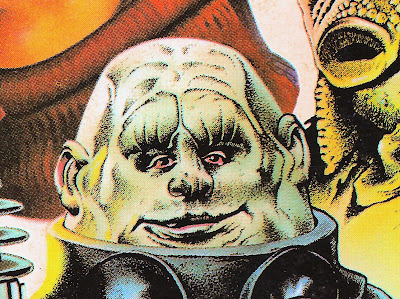 I like the new, slicker Doctor Who, but I do prefer the older, cheaper series. One factor swaying my preference is my affection for facial deformity. Burns, scars, deep fissures resulting from violent blows, birth defects, cranial aberrations, and general alien hideousness; these are a few of my favorite things. In grade school, I was very fond of a little girl who sported a terrific facial scar. Her left eye, too, was a whisper lower than her right eye. What a beauty she was!

My favorite Doctor Who villains are The Sontarans because, well, they're the ugliest. I don't like using the word ugly because it sounds terribly judgmental. But I need to use it because it conveys something most people understand. If I say that a scarred person is beautiful, I may confuse the reader. Most scarred people are beautiful, of course, and I have known a few and been turned on by many. 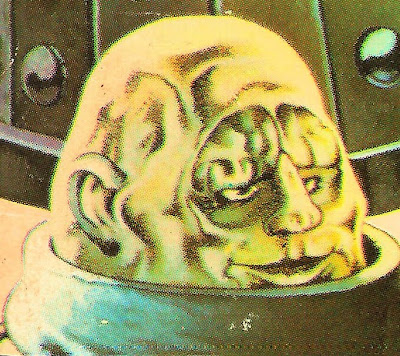 The cheaper Doctor Who embraced deformity and what some humans call ugliness. The Sontarans are a favorite because they're still partially humanoid. Other faves like the Zygons are gloriously "ugly", too, but because they're kind of reptilian (as are the Silurians and Sea Devils) they don't rate as highly on my ugly scale as the Sontarans do.

The first Sontaran to visit Earth (in The Time Warrior) was Linx (pictured directly below). He arrived on John Pertwee's watch. 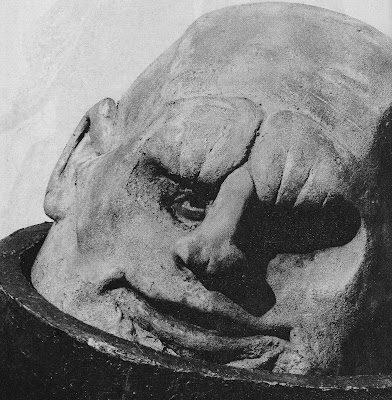 As you can see, he's a striking fellow, a real piece of work. I've always considered him to be a slightly wrong Humpty Dumpty. When I used to recite that famous nursery rhyme, a tale of a fallen egg man, I'd picture him looking very much like our handsome hero above.

I urge you to closely examine this photo and appreciate the deep facial fissures and oddball skull. Such a face has the power to take one's breath away.

The Sontarans returned a couple of year's later in the form of Field Major Steyr. This militant Humpty tangled with Tom Baker, the fourth doctor, and his pretty assistant Elizabeth Sladen. Again, the make-up geniuses behind Doctor Who's finest monsters had a field day with the field major and made ugliness respectable, as it should be. 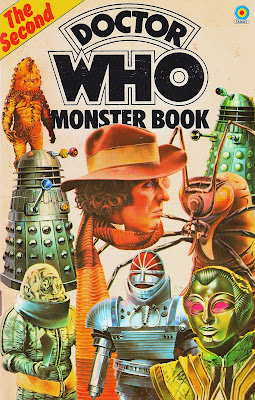 I feel compelled to relate an event involving Linx and an old schoolteacher. When I was attending a dysfunctional private school for boys, a teacher who bore some resemblance to Linx took our class for a week of special mathematics (algebra). Whenever he'd turn and face the class, I'd notice his strange and uncanny Sontaran features. In retrospect, I'm not sure whether it was his face shape, eyes, or general monster demeanor, but he definitely gave old Linx a run for his money in the Sontaran lookalike sweepstakes.

The black and white shot above is scanned from my beloved Dr. Who Monster Book, a publication put out by Target Books that collected the Doctor's enemies into one manageable literary menagerie. 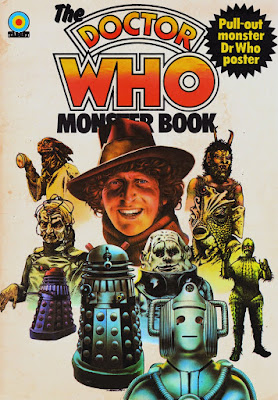 I was well known for carrying this book with me at all times. You never knew when you'd need to consult it.

During one of our endless mathematics classes, I began to circulate copies of Linx's pic... 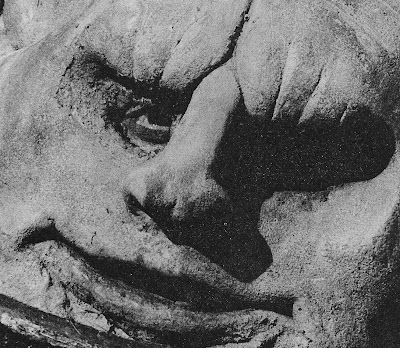 The actual pic
Unfortunately, the pic found its way to the desk of our teacher, the Linx lookalike. He snapped up the photo and seemed genuinely affronted by it. He stared at it angrily -- wincing, I imagine, at its uncanny proximity to his own unfortunate features. When he was done staring, he looked up and said: "Whose is this?"

"I should have known it was yours, Mr. Savage. You seem a great deal more interested in monsters than mathematics."

I grinned. I couldn't argue with him.

"And who is this fellow?"

My teacher didn't seem satisfied with my answer. I couldn't understand why. I'd identified my Sontaran hero. Why did teacher's dirty look linger?

"Really? Why don't you show me where it says his name is Linx."

My teacher flipped the photocopy over and gestured at me to stand.

All eyes were raised as I approached the desk.

He handed me the page and pointed. "Does that say Linx?"

I looked down. Then I felt the back of my neck get real hot.

"Then what does it say?"

"Then go ahead and read exactly what it says."

I took a deep breath and rubbed my sizzling hot neck. The heat was quickly spreading to the rest of my body, too.

"It says 'Mr. Arnold is the Australian Linx', sir."

The class erupted into laughter for about one second. Mr. Arnold's cold, injured glare cut the festivities short.

Mr Arnold turned the page over and stared Linx in the face.

Then Linx was crushed and balled up in Mr. Arnold's hand.

The crushed Linx picture was then placed in my hand. "Take this rubbish to Father Cooper (the school principal) and ask him for appropriate detention. Can you do that, Mr. Savage?"

I returned, without Linx, fifteen minutes later with a detention schedule.

Mr. Arnold, the Linx lookalike, never mentioned the incident again, but he did tell me a year later that he watched Doctor Who "occasionally"... and found it "amusing".

Where is he now?

Probably back on his home planet. Retired on an Earthman's pension. 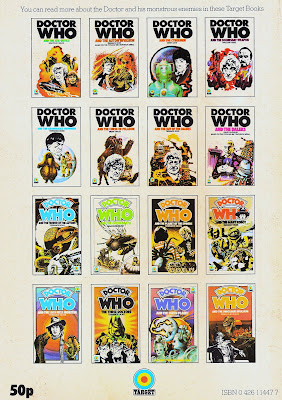 Does Piranha Deliver The Sausage? 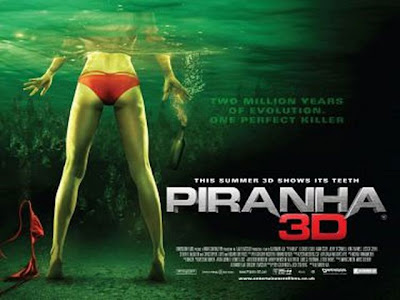 Exploitation films are notoriously guilty of selling the sizzle and failing to deliver the sausage. Us cinephiles carry histories of bitter cinematic disappointment, a disappointment that occasionally kills the passion. Of course, the passion, like a craving for a drug, doesn't stay dead long.

Long rhymes with schlong, doesn't it?, and there's a bonza visual gag featuring one in Alexandre Aja's fantastic remake of Joe Dante's Piranha. Thanks to Aja and his team of enlightened collaborators, this 3-D monster movie delivers the above-mentioned sausage, the sausage beneath the sizzle, and every exploitation element a true exploitation fan could dream about. 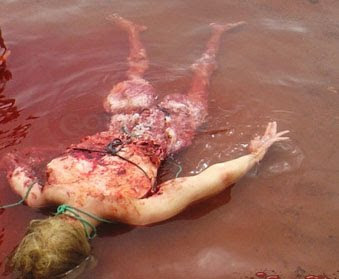 The story is simple and logical , a skeleton on which to hang set pieces. An earthquake causes the rock shelf between two lakes to split. Prehistoric piranhas from one lake are released into the other. The other lake is currently playing host to a bunch of inebriated Spring Breakers. The inevitable result is bloodshed, suspense, and nudity on a grand scale. 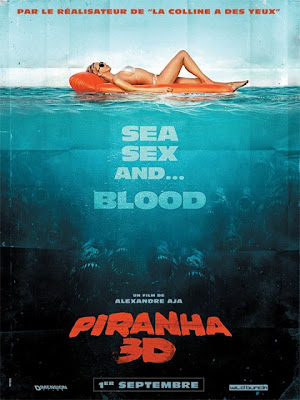 Thanks to ace cinematographer John R. Leonetti, this exploitation masterpiece looks positively amazing; it's directed (by Aja) with precision, care, great invention, and enormous craft; and is graced with some of the bloodiest set pieces this side of Saving Private Ryan. For the gore-hound, it is a smorgasbord of human dismemberment.

There's nothing to really dislike in Piranha -- unless you went in expecting a serious marine documentary or a film populated with real people (nobody here is real, and the teen love story is appallingly written). Script depth notwithstanding, this hits all the right notes, and it's a sausage that wears its aesthetically rich skin proudly. The mayhem is directed with relish and passion, and the non-stop boobage on parade may give the late Russ Meyer a reason to jerk off in his grave. 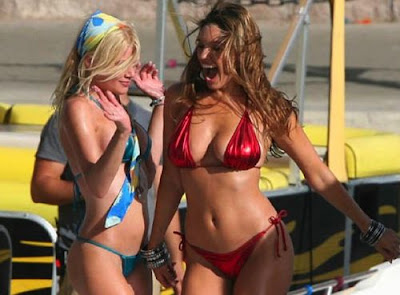 Unfortunately, the film was not as passionately embraced by the public as distributor Dimension would have hoped. The redundant but enjoyably brutal Stallone action pic, The Expendables, outgunned Piranha (3-D***), and may have prevented it from swimming into the public's periphery, which is a shame. Hopefully, this exploitation gem, which truly delivers because the makers truly cared (about everything but decent characterization*), will be rediscovered elsewhere.


* Fulci (Lucio) directed watershed gore classics such as Zombie, The Beyond, City of the Living Dead, and The House By The Cemetery in the late 70's and 80's, and became notorious for the extremity of his work (admittedly, the stuff between the gore in Fulci's films was often dull)

** Worth noting that the original Piranha was written by a real writer, John Sayles, and though the film had a much lower budget, it possessed several more "dimensions" than this

*** I continue to detest 3-D, and this didn't alter my view of the process. During the more frantic sequences, the blurring and strange, uncertain focusing made my eyes and brain ache

Do Yourself A Favor 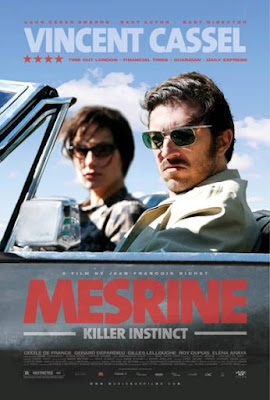 Despite the fact that I originally reviewed them (glowingly!) almost eighteen months ago, Mesrine - Public Enemy Number One, and Killer Instinct, are finally opening in the States. They comprise an exquisite duet in a genre the French are excelling at lately (A Prophet was another winner). I urge anybody who appreciates solid cinema to support these movies with your dollars. 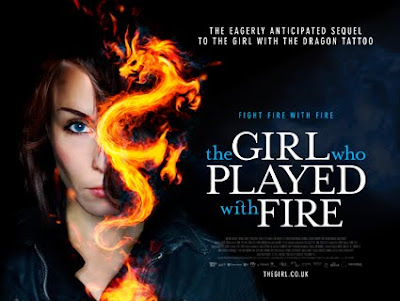 I often ponder what would happen to Quentin Tarantino's career if he featured as much sex in his movies as violence? I'd say the critics and audiences would turn on him. They've sure turned on the makers of the next little gem.

The sequel to The Girl With The Dragon Tattoo, The Girl Who Played With Fire, has been lambasted by most U.S. critics for reasons I'll get to shortly. It's smaller scale entry, sure, and it's not quite as glossy as its parent, but for fuckin fuck's sake, see this film! It's suspenseful, brutal, unrelenting, and downright deviant bullet train of moviemaking. On top of these honors, it boasts an incredible and unique villain.

If the series continues to head in this direction, the third and final installment will be a subversive masterpiece. 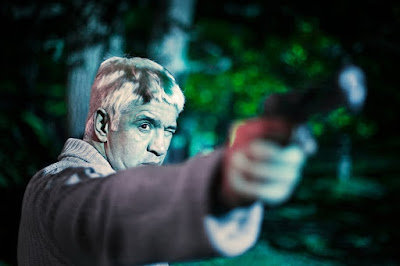 I'd say the high level of sexual content (consenting and non-consenting) is behind the majority of poor reviews the film is getting in the U.S. Let's face it, considerable portions of the U.S. are puritan to the core, and sex is considered more obscene than a human being having their head chopped off. When was the last time a non-porno film was charged with obscenity, eh? Gross discomfort with the sexual nature of the human animal sways the most intelligent critics (with some exceptions, and you know who you are!) in the U.S. Very few seem capable of shedding their puritanism so that they can fairly and objectively review films with high level sexual content. For some reason, all that flesh and sweat tends to overwhelm them.

A classic example of puritan backlash (or is that whiplash?) was Giussepe Tornatore's exquisite The Unknown Woman, one of my favorite and most beautiful/brutal noirs of the last five years. 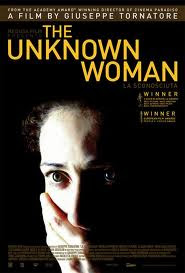 Ignore the puritans, listen to the audiences, and make a date with The Girl Who Played Played With Fire.

Also well worth catching this week is the excellent Hugh Hefner doco, Hugh Hefner - Playboy, Activist and Rebel. It's a pretty exhaustive look at the man and, primarily, his brave, lifelong campaign to fight official and unofficial racism in America. The Hugh many of us thought we knew is but one part of a fascinating gentleman and modest activist. Even an American hero.
Posted by Phantom of Pulp at 4:16 PM 9 comments: