Bondage/fetish art Di Mulatto is dead, but, like any fine artist, he left behind a legacy that will endure forever. 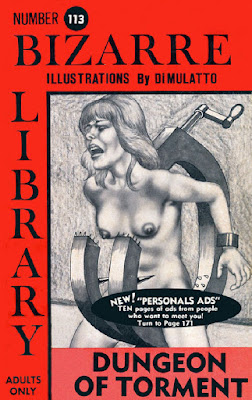 The Bizarre Library series of books, which are not an easy find,  often didn't bother to credit writers, even though the quality of the writing is above average for the genre.

Here's a sample of the above books' opening:

"Isn't Eve Sedgewick lovely?"  someone murmured, and there was a general turning of heads and flutter of whispers as eager, bright eyes turned to see the famed beauty enter the statesroom of the yacht.

Her eyes were large and cool blue, and there was a supercilious arch to her eyebrow, as if to say, "I'm better than you are, and I know it."

She had a small, perky nose and full, voluptuously sensuous lips, the color of passion fruit.

Her figure was magnificent.  She was wearing a shimmering white chiffon gown which was sleeveless and cut shockingly low over her curvaceous torso.

Her thrusting, ballooning breasts pressed against the pale material as if ready to spring free at any moment.

Her waist was trim and slender, and her hips just wide enough to be sensual without being pudgy. 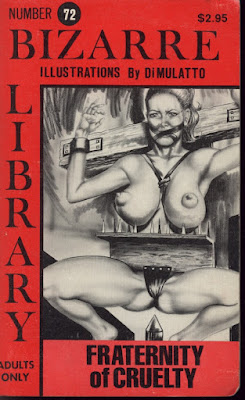 Certainly the best of the genre was being produced by H.O.M. (House of Milan) with covers by Robert Bishop and text by FE Campbell. Still, Bizarre was a worthy competitor. 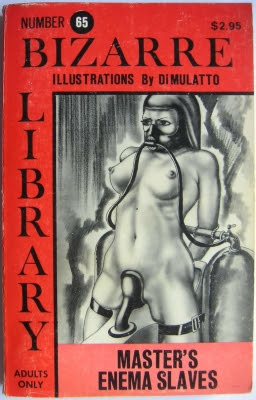 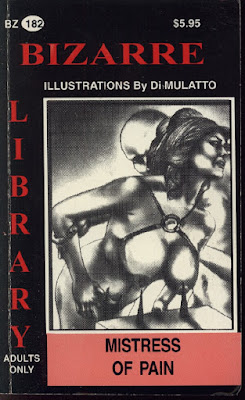 "Mistress of Pain" is one of my favorite Bizarre titles. It's a little overwritten, but passion trumps all any time.

This is from the book's prologue:

Diana Cazadora's smile was a menacing wreath of cruelty as it played about her lolling tongue. The incessant metallic glow from her green eyes pierced through the web of oiled black tresses that crawled in serpentine tendrils over her ivory shoulders to her brilliantly nippled titflesh.

She saw the looks of putrid fear on the faces of those who had profaned her.

Those who now knew that humiliation, degradation and abysmal pain would be their punishment.

Diana saw also the stony grimaces of those who had yet to penetrate her domain. They would soon know that the indomitable savagery of their mistress's snapping quim was no legendary tale.

It was the key to their existence.

The bristling snake pit that would succor their hunger. By feeding ravenously upon them.

Sweat ran cold as she spoke, and cunt-juices stopped dead in their cracks. Semen hardened in dicks heavy with churning blood.

"The men have proved that they cannot even pretend to master the empire of pain, of panic-of pandemonium. Therefore the mistress will resume her rightful place."

Her hips twitched like the rump of a leashed bitch in rut.

"The animals die with fear in their eyes," she said with flared nostrils. "Let's see how keen you all are to meet my machines." 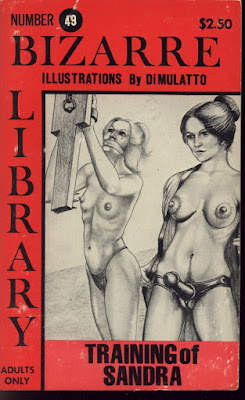 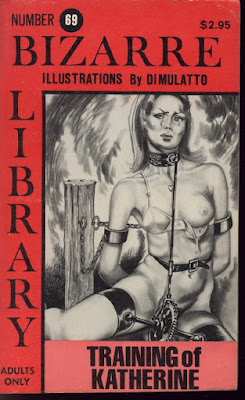 The covers below for "School For Sex Slaves" and "The Professor's Dungeon" represent a regression in cover art.

As the cover price was now $4.95, it's not illogical to assume that these books appeared a couple of years after the previous titles, and the artist is now "Esposito", someone I'm not familiar with.

Does anybody out there know anything about this Esposito? 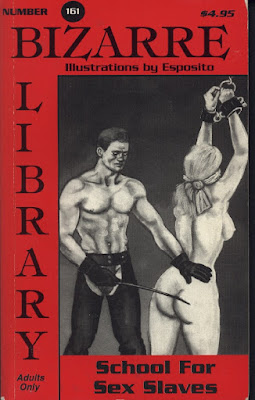 Although adhering to genre standards, the illustrations are unfinished and lackluster, and totally lack
Di Mulatto's mix of sadness, submission, and euphoria. The second cover also depicts a full-frontal image, rare for this series. 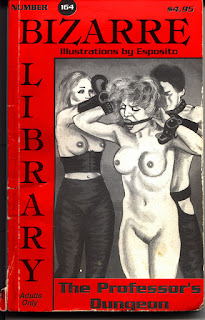 Although Bizarre traded in fetishistic themes, they did issue a smaller number of more conventional novels that Di Mulatto illustrated with his usual brilliance. 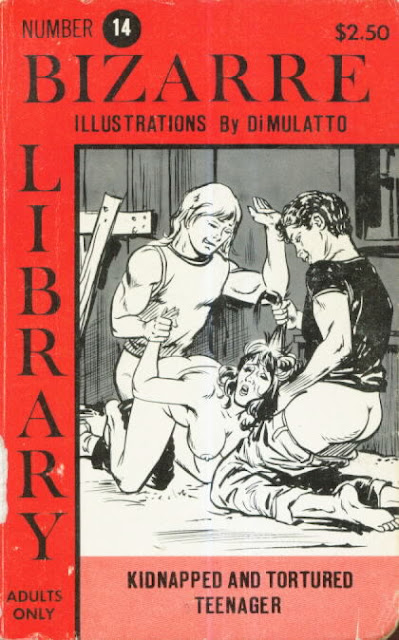 note the disparity in the spelling of the artist's name.
On his "Mark of the Master", the spelling is de Mullotto
Bizarre Library, with Di Mulatto, either gets it wrong, gets it right, or is making some point

For this post, I've used Bizarre's choice.
Posted by Phantom of Pulp at 8:47 PM 2 comments: