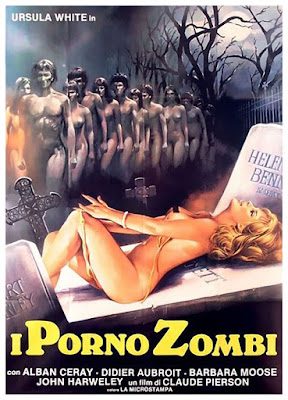 Though promoted as such in some markets, this is not really a zombie film, it is more of a porno/sci-fi film with a zombie film vibe (ZOMBIE LAKE, OASIS OF THE ZOMBIES). Had I been told Jess Franco directed this, I wouldn't have been shocked, but the sex scenes don't possess the Franco point of view.

Ultimately, the plot doesn't make any real world sense, but spending ninety minutes in the cinematic world of this film was a rare pleasure.

(I researched the work of Huguette Boisvert (who often wrote as Elisabeth Leclair) and, wow!, she's been incredibly prolific, and did write a number of obscure French films I'm very fond of including TENDRE ADOLESCENTE, JEUNES FILLES POUR PARTOUZES, LA GRANDEV RECRE, and ALL ABOUT WOMAN. Admittedly, some of these titles I've only watched un-subbed).

Posted by Phantom of Pulp at 9:12 AM No comments: