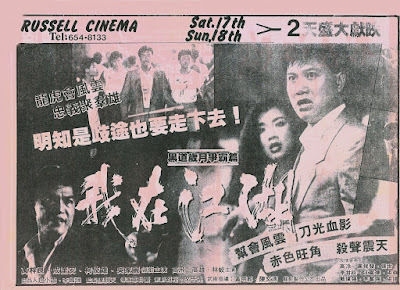 The mid-80's to the early 90's were a golden age for Hong Kong cinema.

In Melbourne, Australia, the Chinese exhibitors' solution was to rent additional screens from the English language chains (Hoyts and the Russell Cinemas chain, for example) to play their surplus. For a die-hard fan like myself, it was possible to see between four and eight new releases each week.

I have strange memories of frantically driving into the city with my brother on two or three weeknights per week to catch releases that were guaranteed no more than a seven day theatrical run. 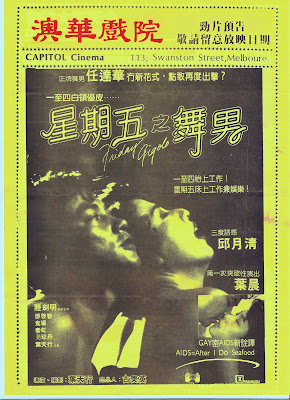 Friday Gigolo ('92), from actor/director Stephan/Stephen Yip, was one of several Simon Yam vehicles in which the actor portrayed a gigolo. It was not a good film.

Yip is perhaps better known for the fairly miserable, somewhat overrated (in some circles) Mad Stylist, a flat, inept horror flick concerning a murderous hairdresser. Although the concept was novel, the execution was piss poor. 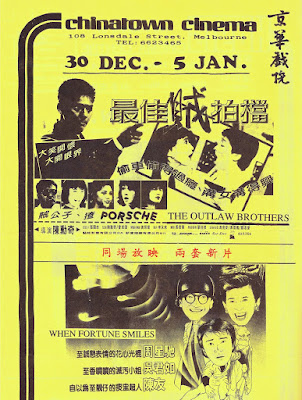 Frankie Chan's Outlaw Brothers ('90) was a welcome addition to the genre. After Chan impressed me with Burning Ambition ('89), I was expecting something special from this entry. Happily, I wasn't disappointed. There are some brutal and inventive fight scenes and Yukari (Angel) Oshima, the Japanese dynamo, has several rough, energetic confrontations with inferior opponents.

Interestingly, the film was originally banned in Australia on the grounds of animal cruelty. There is a sequence involving hundreds of chickens that probably didn't endear the makers of this flick to the Australian film censorship gestapo.

By my reckoning, Outlaw Brothers is compulsory HK viewing.

Unfortunately, it is MIA on US DVD, but was released in the UK by Hong Kong Legends in 2005 (supreme blogger/ex-Melbourne boy Jack J rightly points out this UK DVD is cut).

Chan's Burning Ambition was released on VCD in Hong Kong, but has not seen a DVD release. 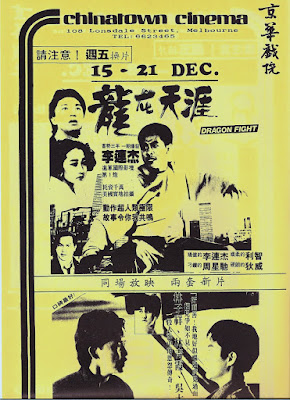 Dragon Fight was a weak actioner featuring Jet Li in an early role. Set in San Francisco, I wasn't aware of Jet Li at the same. Nobody else was, either. It is one of his earliest films. Stephen Chow appeared, too.

Unfortunately, during this age of massive output, Hong Kong films that set their stories in Western locales were usually filled with godawful English-speaking actors. This film is no exception. The English-language actors are embarrassing retards. 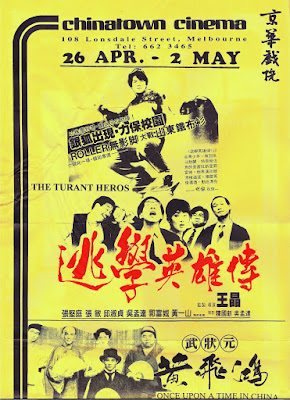 The Turant Heros is not the correct title of this film; that title is a typo. The actual title is The Truant Heroes, and it's a lousy Wong Jing production from '92.

I remember well watching it and being so bored I started to eavesdrop on two Chinese students speaking broken English directly behind me. 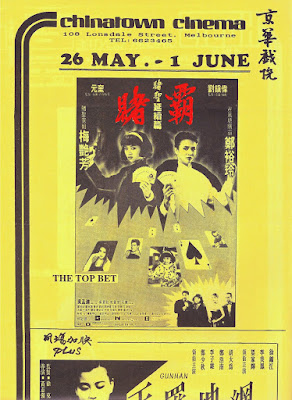 There was a time when gambling films were as common as Chinese gamblers in the Colony. I have liked very few of these films. I did enjoy God of Gamblers and God of Gamblers 3, but The Top Bet aka All For The Winner 2 ('91) bored me silly. Some above-average action and a strong performance from the late Anita Mui didn't save it. Her co-star, Carol 'Do-Do' Cheng, appeared in a shitload of non-action films between '79 and 2002, and, in retrospect, was the Hong Kong Jennifer Aniston/Julia Roberts (with slightly more diversity in her career choices).

My favorite films of hers during this period were Mabel Cheung's Now You See Love Now You Don't (with Chow Yun-Fatt), Gordon Chan's Brief Encounter in Shinjuku, Alfred Cheung's Her Fatal Ways, and Lawrence Ah Mon's gritty Queen of Temple Street. 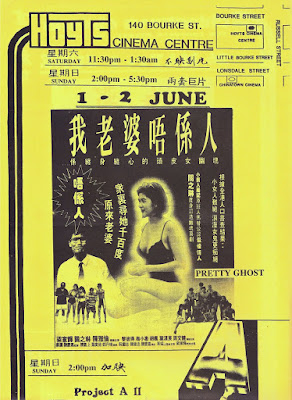 I sat through this nonsense in order to see Jackie Chan's Project A Part 2 on the big screen. Loved it,m of course.

Enough said about the main feature. 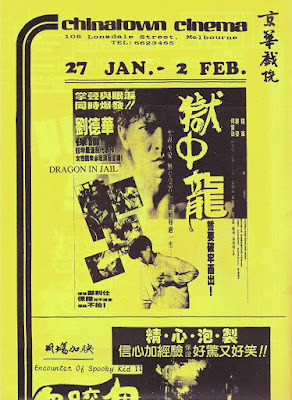 Dragon in Jail ('90) marks a period in Andy Lau's career when, for me, he started to get interesting. This solid action drama was directed by Kent Cheng, the fat actor who watched his daughter being burnt to a crisp in the obligatory Run and Kill. Lau held his own in this flick and, for the first time (IMHO), he found his acting chops. In dozens of films prior to this, I always found him to be a weak leading man.

Now, two decades later, I find him to be an amazing actor.

If you were on the lookout in 1990 for a haunted kid movie, you would have been disappointed if you'd rushed to the Chinatown to see 'Encounter of Spooky Kid II', Dragon's supporting feature. The 'Spooky Kid' title is another typo. The film is actually the sequel to Sammo Hung's great 1980 comedy hit Encounters of the Spooky Kind, a very inventive action/horror/fantasy.

Ricky Lau's sequel, Encounters of the Spooky Kind II, was slightly above average (thanks to Sammo's thespian input), but, like many Hong Kong comedies, it didn't know when to drop the gag and move on to the next one. 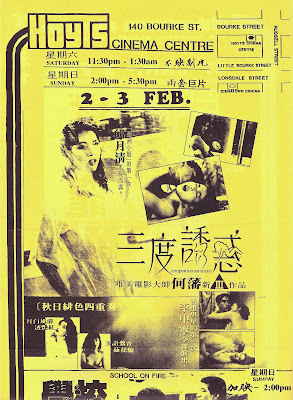 Director Fan Ho made a number of fluffy and breezy softcore outings; this, though modest, was one of his best.

Temptation Summary ('90) earned enough box office trinkets to warrant a forgettable sequel. The Japanese cut of the original is slightly longer with extra nudity but capsized by annoying fogging.

Teamed at Hoyts with Ringo Lam's solid School On Fire. 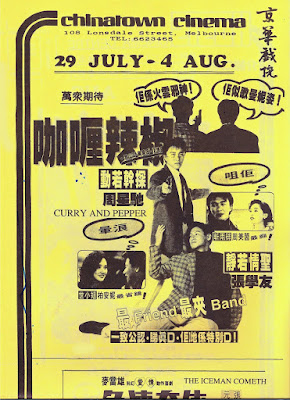 Before Stephen Chow earned international recognition as an actor and director, he made a slew of comedies and comedy-actioners such as Curry and Pepper ('90). In this outing he's paired with Hong Kong singer Jackie Cheung, who later went on to star (in the same year) in John Woo's brilliant Bullet in the Head.

As evidence of Chow's emerging talents, this is a pretty solid exhibit.

The supporting feature, The Iceman Cometh, is an outstanding fantasy/action flick. 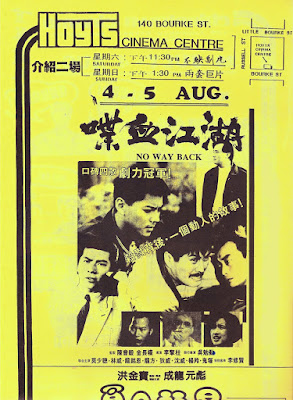 I'm ashamed to admit that I have no memory of No Way Back ('90). Imdb has an erroneous review of it, mixing it up with the El Mariarchi-inspired Run, a '94 effort.

I know this is a different film because it stars Danny Lee; Lee was not in Run. 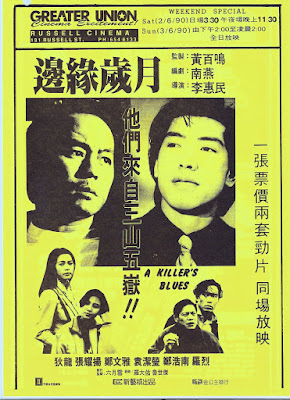 I liked Ti Lung in A Killer's Blues ('90) very much. Although sold as an action pic, it really isn't one. It's more of a character study along the lines of Le Samourai and the current The American.

Director Raymond Lee made very few decent films, but this is one of those.

Try to catch People's Hero, too, if Lung's post-Shaw work is to your liking.
Posted by Phantom of Pulp at 4:08 PM 1 comment:

Bathing in the Glow of Freak Sex 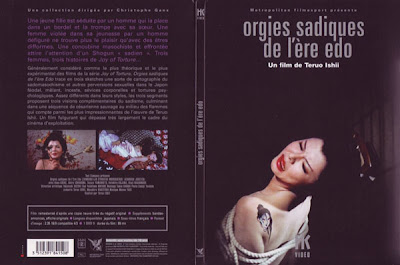 Lately, it has become achingly apparent lately that I have more in common with the late director Teruo Ishii than any other director I can name. Actually, I have no idea what his actual hobbies or outside interests outside of film were, but a filmmaker's chief interests and obsessions can be found in his films. I'm speaking from experience.

Why was my smile so broad while watching this delightful outrage? Why was it so pleasurable to see such a beauty defiled by one so grotesque? Since I was but a single digit human staring at images through large, pre-teen spectacles, I've been fond of malformed men. Perhaps "fond" is the wrong word. The right word is "obsessed". Yes, I've been obsessed with these creatures and their intimate relations -- which are usually rather unconventional. Something happens within me -- something pleasant -- when I'm fortunate enough to witness freaks engaging in activities of the sexual variety. Are their acts the ultimate taboo? Does behavior of this nature please the anarchist inside me? 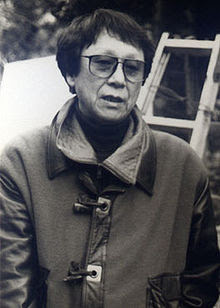 Director Ishii, who was also behind HORROR OF MALFORMED MEN, has a passion for material of this nature, and this passion is salaciously transferred to the screen. In the West, MALFORMED is undoubtedly the director's best known work of freak horror, and was recently released on DVD by Synapse. For my money, it's not as coherent as it could be, and it feels like two films squashed into one, but the Dr. Moreau-inspired freak compound is a wonderful creation and the on-screen roster of malformed exhibits is a pleasure to behold. It deserves to be seen. But it is only one example of Ishii's very specific cinematic obsessions. 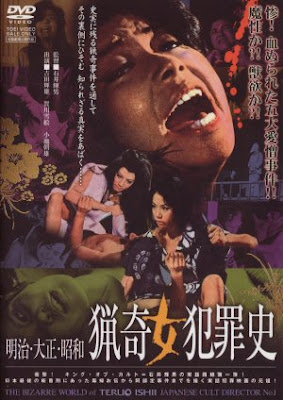 In the rather excellent LOVE AND CRIME, the director's penchant for the erotic-grotesque (the two go hand in hand!) is pushed to a satisfying degree. The most striking tale involves a remorselessly lecherous victim of leprosy who won't take no for an answer when it comes to bedding down with his wife. Scenes of the hideous freak attempting to kiss and cuddle with his lady are glorious to behold, and once again broadened my smile to the point of cracked lips. When the leper learns that he's being cheated on, he confronts his wife's lover and initiates a brutal confrontation.