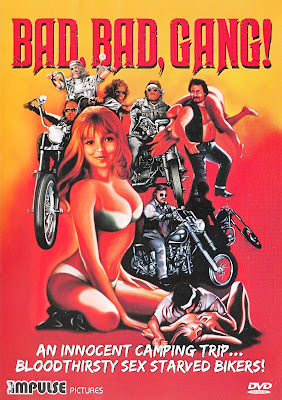 Definitely X-Rated and featuring plenty of rape and anti-social behavior, it, nevertheless, keeps the violence very soft and rapes not too far left of consensual.

Simple premise sees two couples holidaying in a trailer ambushed by a gang of dim-witted bikers. Two women are carried off to a nearby cave where they are tied up, sexed up, and roughed up by said bikers while the biker molls look on in disgust. That disgust becomes a desire to get even with their leather jacketed partners for the molls, so they return to the trailer to fuck the men folk who lost their ladies to the gang. 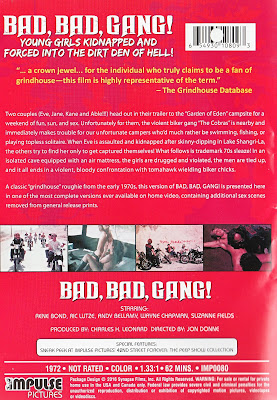 BAD BAD GANG is let down somewhat by the poorly staged violence, and it's very apparent that director Donne did not know much about staging anything but fucking and sucking when he made this baby. An opening sequence of the bikers following the trailer down a country road is high end for a pic of this ilk, but it doesn't stay that way for long.

Kudos to Impulse for dredging up this relic and re-instating scenes cut from general release prints. This is as complete as it gets.

I always love seeing a new roughie, but it's always disappointing, too, to discover that most were rarely directed by anyone with serious filmmaking chops. Nevertheless, for fans of sleaze that isn't quite as hardcore as the marketing suggests, this is a nice gift.
Posted by Phantom of Pulp at 3:03 PM No comments: 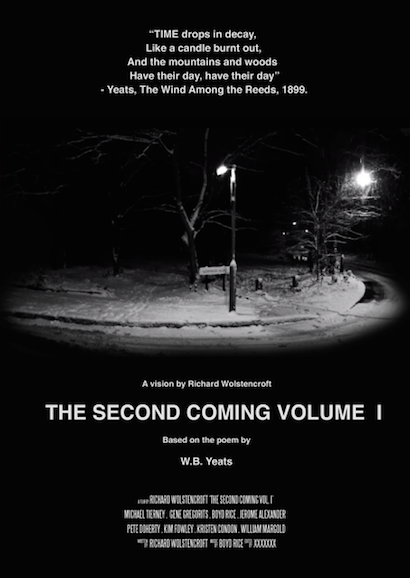 "Wolstencroft's Odyssey" is the first description I would reach for to describe his THE SECOND COMING –– VOLUME 1, a feature-length rumination, fueled by the essence of W.B. Yeats, on power, the occult, mysticism, politics, religion, and the inevitability of self-destruction.

This loosely directed, but smartly curated work, fell on my eyes initially like a welcome acid rain with its rainbow-like mixture of images and characters. Although mostly non-actors fill its roster, these are rarely ordinary folk –– on the contrary, they are predominantly anti-Establishment figures, alternative press writers, infamous record producers, documentary figures, and formidable, card-carrying troublemakers who naturally tend to toward being potent metaphors of their own intellectual positions.

Richard Wolstencroft, as is his fetish, has assembled these rogues from the four corners of the globe and forced a narrative for them that provides a skeleton on which to hang broad contemplations and sharp slips of the tongue.

Although his previous films such as PEARLS BEFORE SWINE and THE BEAUTIFUL AND THE DAMNED took detours into the type of material presented here, these digressions were sometimes heavy-handed because they felt divorced from the imposed narrative. There's no problem with that here because the narrative, while novel, is deliberate nonsense that has us hungering for the detours. Ultimately, the film is permanent detours, and that is its strength.


Ex-porn actor Michael Tierney, who was the subject of a prior documentary by Wolstencroft, is this film's unofficial narrator as he wanders, quite literally, through landscapes that both starve and feed his troubled psyche. Along the way he engages with author Gene Gregoritis, and points us towards bouts of insanity with record producer Kim Fowley (now deceased), an encounter with the passionate literary poison of the indefatigable Boyd Rice, fragments of the luminous Kristen Condon, whose role is considerably larger in the sequel, and a shadowy liaison with Pete Doherty and his cohorts.

The film sticks to ya. Technically it's what you would expect from a one-take doco because it is one-take (it's recording the heart and the head), but the pleasure of this film, Wolstencroft's best, and the first to truly reflect his own truth, is the smeared, crazy, drunk, stoned, uninhibited journey. Surely that is a type of cinema to be encouraged.

Posted by Phantom of Pulp at 8:19 PM No comments: