The Island of Dolls Isla de las Munecas (Doll's Island) is a stunning oasis of abandoned, deformed, unwanted, and limbless dolls, and it is where I will be heading on my next vacation.

It is in Xochimico, an area outside of Mexico City where there are many canals.
I have already sorted flight schedules, transfers, etc. 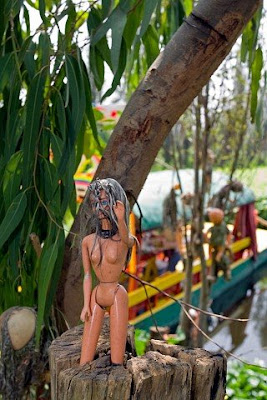 Since stumbling on these wonderful photographs (courtesy of Juan C. Hamparzumian and the Mexico Photography Club), I have not gone a day without obsessing about the island and my impending trip.
It is of special interest to me because I am a lifelong collector of dolls like this. Although there are some traditional dolls in my collection, I am most interested in the generic, plastic doll, a doll often characterized by its (apparent) lack of identity, and low cost. These dolls seem so much sadder to me, symbols of abandonment and abuse.
My collecting is a type of rescue, I suppose, so I treasure them a great deal. 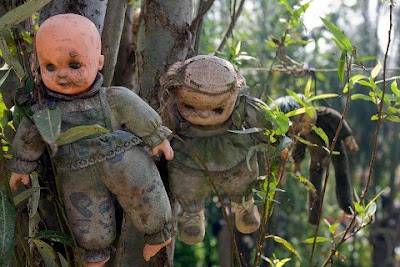 In the 50's, a man named Julian Santana Barrera started to collect dolls found in the trash. He lived on the small island and hung the dolls from trees like scarecrows in order to scare off bad spirits. It is rumored that a girl drowned on the island, so the dolls were also accommodated there to keep the dead girl company.
Her death had a silver lining. 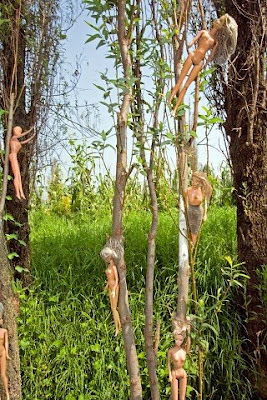 It is impossible to imagine why anybody would not want to visit the island after hearing this fascinating story.
Hopefully, I can spend a couple of days there, even a night or two, and record the lives of these once abandoned personages. 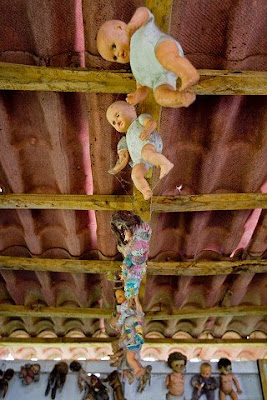 It is bizarre for me to see the dolls in blue above because I have several in my "orphanage".
Perhaps I can gift several to Isla de las Munecas. 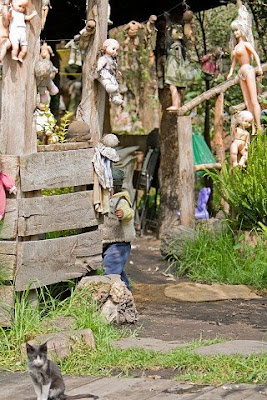 It fills me with joy to see that this cat has been employed to guard the island along with its human caretaker. 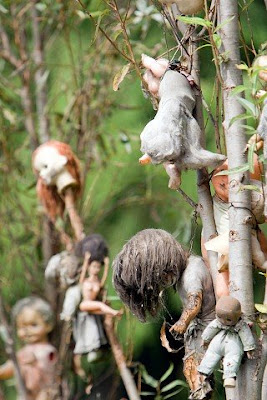 The photographer is definitely sympathetic to the milieu of these dolls, and has shown them enormous respect in these compositions. 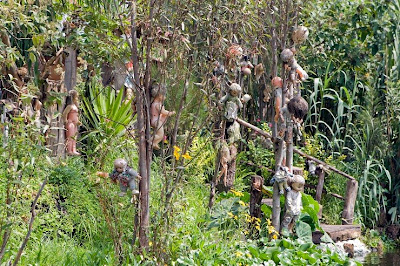 They are truly beautiful creatures, and it is heartening that a true island of lost souls has been found, their souls possibly restored.
Go here to see a video about the island:
http://www.youtube.com/watch?v=1gLKTyfrWCY
I don't know why the silly reporter is so creeped out by the island. Why choose to become a reporter if you're so conservative?
She can't understand why Julian Santana Barrera is "comforted" by the dolls, and she calls the place "weird".
Turns out, she's the "weird" one.
Posted by Phantom of Pulp at 5:01 PM