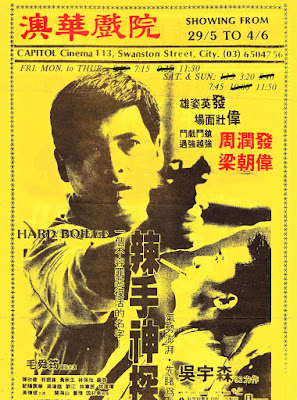 I feel fortunate to have seen all my favorite Hong Kong movies from the 80's and 90's on the big screen.

There was a time in the early 90's when Melbourne was being serviced by 4 screens each week. The Capitol Cinema, a dedicated Cantonese movie palace, added an additional screen to its bow when it leased a screen from local mainstream exhibitor Greater Union.

The Chinatown, the original Melbourne home for Hong Kong cinema, leased a screen from Hoyts, another mainstream exhibitor.

It was a glorious time for the fans. 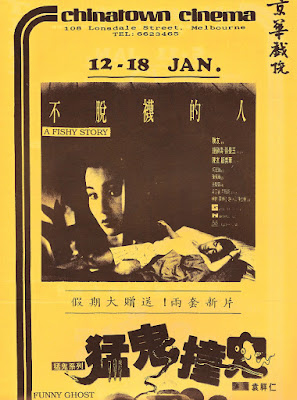 One of my favorite Hong Kong films of all time, A Fishy Story ('89) was a revelation on the cinema screen. Peter Pau, who went on to shoot The Bride With White Hair, Crouching Tiger, Hidden Dragon, and The Bride of Chucky (!), delivered breathtaking images.

Richard Yuen delivered a score inspired by John Barry's Body Heat, but very much its own beast. 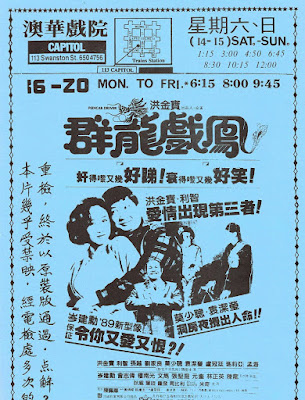 It is a stunning piece of work with some of the most brutal, expertly choreographed fight scenes in all Hong Kong cinema. 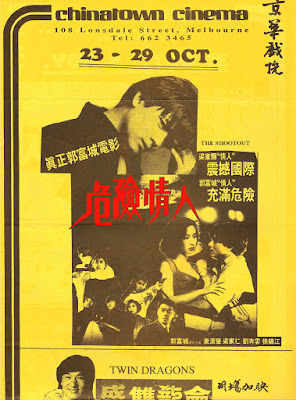 The Shootout ('92) was nothing great, but I took this opportunity to see The Twin Dragons ('92) again.

Directed by Ringo Lam (great!) and Tsui Hark (always an iffy proposition), it does feature an amazing fight sequence in an auto paintshop. 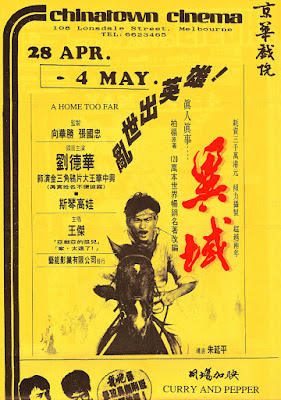 The theatrical version I saw contained additional war/violence footage cut from the laserdisk and DVD. 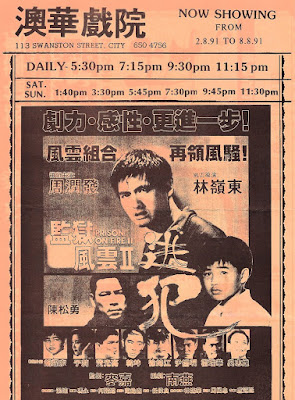 For a while back there, Chow Yun Fatt seemed to be in a new film every week.

I will always see anything by Ringo Lam. 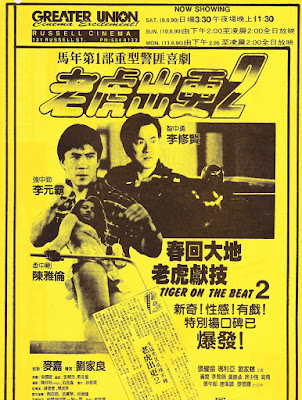 Certainly not up to the quality of the original Tiger on Beat ('88), this 1990 sequel wih Danny Lee and Conan Lee did boast a great stunt sequence in which Conan falls from a streetlight onto his hip. He was hospitalized.

None of the Hong Kong exhibitor/distributors advertised in English language newspapers.

They handed these flyers out instead.

The flip side often featured next week's show.
Posted by Phantom of Pulp at 5:31 PM

Labels: A Fishy Story, A Home Too Far, Hard-Boiled, Pedicab Driver, Prison on Fire 2, The Shootout, The Twin Dragons, Tiger on Beat 2