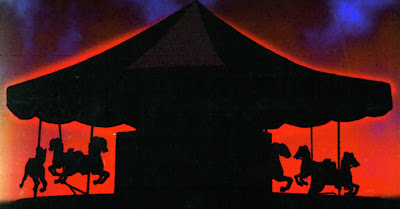 I love this image from the paperback edition of Bentley Little's The Ignored (Signet; June, '97). 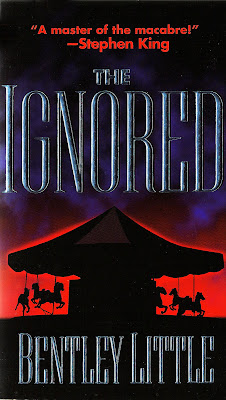 The carousel has nothing to do with the book. It evokes creepiness, as anything carnival-esque often does, and it renders a foreboding atmosphere.

There a lot of Bradbury's Something Wicked This Way Comes in that cover. A feeling that trouble is on the horizon.

How do you graphically represent a subculture of people who are, literally, invisible those around them? How do you portray The Ignored?

In this case, Signet decided not to.

Although the carousel and coloring is impressive, it's also generic. Because it's so unspecific, it gives the browser no idea of what's inside the book in terms of story.

Does such a tactic miss the opportunity to connect with readers who are unfamiliar with Little's work? 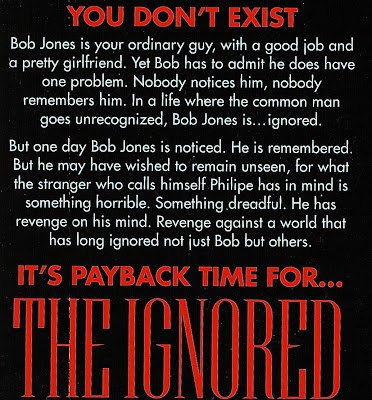 The back cover circles the concept by personalizing one man's dilemma -- nobody notices him. It does not propose the premise in a more general sense such as:

"What if nobody noticed you anymore? Would that make you angry? Or would that make happy? Think of the possibilities. If you really were ignored, you could get away with murder."

That's the premise in a nutshell, but the blurb doesn't go there.

I'm curious because The Ignored has been ignored by many horror fans. Along with The Mailman (my favorite Little book) and The Store, it's in my top trio of the author's amazing works. But when I mention it to colleagues or on-line buddies, few have read it. 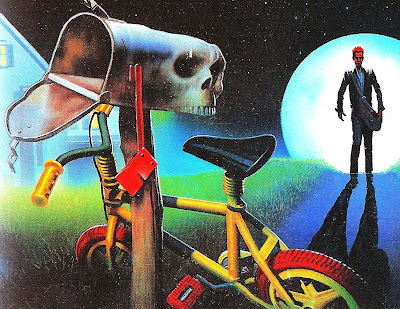 Little isn't active on on-line forums and blogs like authors such as Brian Keene, Jack Ketchum, Bryan Smith, Edward Lee (to some extent) and Michael Laimo.

Leisure's stable of writers make their presence felt on-line. Writers like Little and John Saul do not. 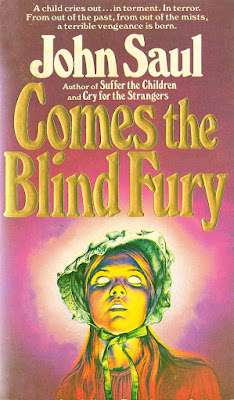 Saul had an active forum at one time, but he scaled it right back. There are some websites devoted to Little, too, but they're infrequently updated. There is no dedicated web presence.

I consider myself a very dedicated fan, and I actively follow new and old authors. My sense is that Little is doing himself no favors by maintaining an MIA status on-line. Am I off the mark?

Today, I think an on-line presence for an author is essential. A presence in one place propagates to others.

Stephen King has an official site. If there's anybody who could justify not having an official web presence, it's King, but he has one, anyway, because it keeps the King brand in the stratosphere.

MacDonald's do the same thing. Do they NEED to advertise that they exist? Not necessarily, but they keep on advertising because they have competition. They advertise to keep the brand (and brand loyalty) at a healthy fever pitch. 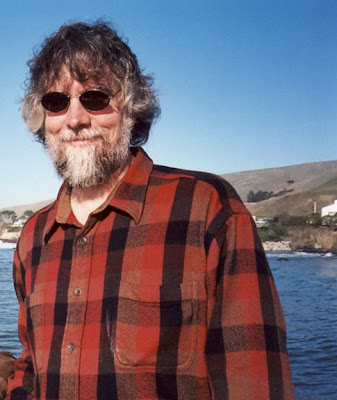 I'd like to see a stronger Bentley Little web presence because I think his work is amazing.

Admittedly, I don't always like the way he rushes to resolve his stupendous premises, but I'm totally drawn to his perverse imagination, and his black as pitch humor.

He's up there with the finest writers of the fantastique in the world. 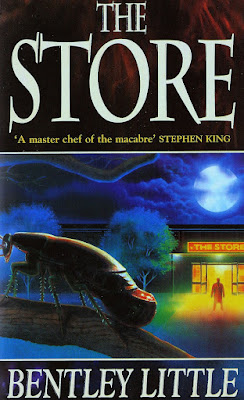 Little is with Signet, not a publisher associated in the public mind with horror. Saul is with Ballantine, a publisher of mass market fiction; they publish horror, but they're not known for it. And much of their horror has been shifted to the "Fiction" list.

Leisure Books, on the other hand, is strongly identified with horror (at least for fans), even though they have robust Romance, Western and Thriller imprints; their parent is Dorchester.

Bentley Little's work gets very decent distribution; I can always find his titles at Borders or Barnes and Noble. Sometimes he's in "Horror", often he's in "Fiction". Since "Fiction" is a larger category and more diverse, that may be a better thing for him.

Here's the crucial question: Is the web pointing readers to writers they don't know, or is the presence of an author's book (in sufficient quantities) on physical bookshelves enough to drive sales? 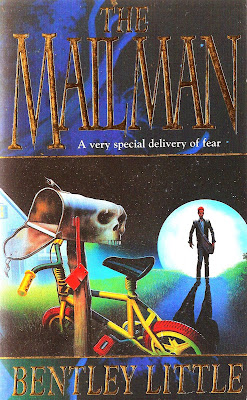 I say Yes to the first question, and No to the second.

There is an interesting assumption when one sees many copies of a single author's book. To me, at least, it indicates popularity. Demand. But it's not enough these days because on-line retailing is booming while in-store sales are receding like George Costanza's hairline.

Let's return to Stephen King once more. He's everywhere. His books are so plentiful they cause the shelves to sag. Few authors have the shelf sagging weight of Stevie. His competitors can only attempt to shift attention from the mighty K-L category of horror authors which now includes King and Keene, Koontz, Ketchum, Laymon, and Little. Despite his power to splinter the timber of bookshelves, King remains a potent web presence.

The rumpus on Little is he's a shut-in, a reclusive fellow who prefers not to spend his precious time on planet Earth on-line. He wants to focus entirely on writing. Nothing wrong with that.

But if the wordsmith who's been called a "master chef of the macabre" and "the horror poet laureate" by Mr. King wants to elevate his "brand" in the horror and general book buying community, a web home is essential. How the web home is managed is up to the author and/or publisher, but it's a necessary evil than can no longer be... ignored.

Am I off base? 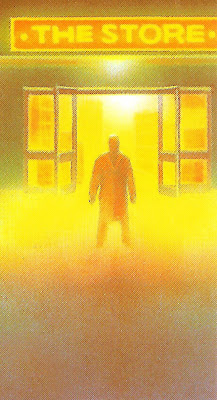